Yume-Miru Kikai (or Dream Machine) is the fifth animated work of Satoshi Kon. It has resumed production since his death.

"The title will be Yume-Miru Kikai. In English, it will be The Dream Machine. On the surface, it's going to be a fantasy-adventure targeted at younger audiences. However, it will also be a film that people who have seen our films up to this point will be able to enjoy. So it will be an adventure that even older audiences can appreciate. There will be no human characters in the film; only robots. It'll be like a "road movie" for robots."

In an interview with Anime News Network, Kon explained that the movie is basically a "road movie for robots". It will also be Satoshi Kon's first family-friendly film. The film will center on three characters, Ririco, a smart, leaderly Paprika like character, Robin, the small yellow robot, and King, the big. loyal, blue bot.

During Kon's battle with pancreatic cancer, the director expressed concern about the film being finished to Madhouse head Masao Maruyama. Maruyama assured Kon the film would be completed, no matter what. When Kon died, production was suspended indefinitely until further plans could be worked out over the film. On Friday November 12, 2010 Madhouse Studios announced production resumed with character designer and chief animation director Yoshimi Itazu taking over as director of the film. At Otakon 2011, Maruyama revealed that production had been put on hold for financial reasons, but that he was dedicated to eventually be able to finish the film. According to Maruyama, about 600 shots out of 1500 had been animated at that point.

In 2011, founder Masao Maruyama left Madhouse to found MAPPA in order to "make new shows that we wouldn't have been able to make at Madhouse." At Otakon 2012, he stated regarding Satoshi Kon's unfinished film, "Unfortunately, we still don't have enough money. My personal goal is to get it within five years after his passing. I'm still working hard towards that goal."

At the Otakon in July of 2015, Maruyama had stated that the studio was still working on the film and was looking for a director who would have the same talent as Kon. Maruyama has stated that no one is able to match Kon's skills. 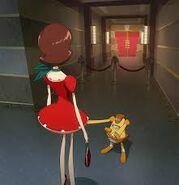